How I learned the definition of tejido

I am completely captivated by the rich Mayan culture in Rabinal. Look, my own family has been in the United States for at least three generations, if not more: our traditions consist of turkey on Thanksgiving and presents on Christmas. So when we discussed the importance of interculturality in Voces y Manos’ leadership classes, I couldn’t wrap my head around what culture meant to these students. What was it like to feel so deeply connected to your community that you identify yourself as someone from the “Chiticoy” neighborhood, rather than the larger city of Rabinal? What traditions did parents teach these students that they eventually wanted to teach their own children? And how, exactly, do these students keep the Mayan culture alive? 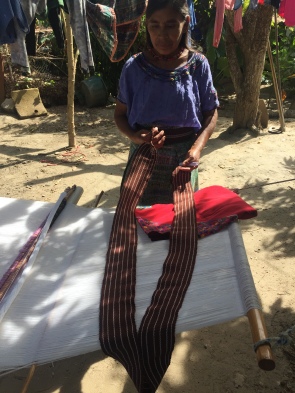 Well, given the freedom here at the Voces y Manos office to develop our own projects (thanks, Michael!), I decided I wanted to learn more. Armed with my iPhone camera and a desire to immerse myself in the Mayan culture, if only for fifteen minute interviews, I embarked on a journey to several students’ houses to ask them about their Mayan crafts.

Ok, so my first visit wasn’t as much of a journey as it was a 30 second stroll down the street, but I haven’t left Rabinal in a month and I’ll take what I can get.

My first visit was with Sheyli, a Voces y Manos scholarship student with the brightest smile I know. After arriving at her house, the first thing she did was smile (and laugh at me a bit) while teaching me the Spanish word for a weaving: tejido. As Spanish words tend to do, it immediately left my brain. But, I must say, the loom Sheyli and her mother pulled from a nearby closet put the word right back in there: how could I forget what tejido meant after seeing something so beautiful and grand? The process of setting up the loom, attaching strings to a tree and wrapping Sheyli in strings at the opposite end, seemed both an intricate and natural process for mother and daughter. 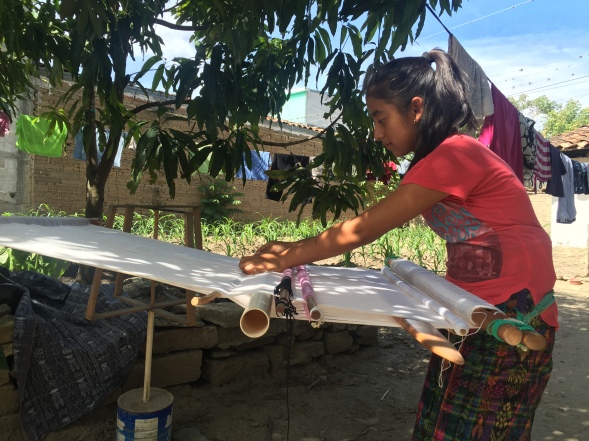 Sheyli began explaining the weaving process, of which I understood little (see above for an illustration of my weak weaving vocabulary). But it didn’t matter how much I understood: I was captivated by how deftly Sheyli slid the chocol (had to look at my video to remember that word – some words really don’t stick) between the white, tautly stretched strings. Row by row, Sheyli added to her creation. As she weaved, her mother proudly displayed Sheyli’s first weaving, placing it on top of her current one for comparison. As beautiful as the first one was, her current one was even more detailed and precise.

Struck by the beauty of the process, the only word that I could say was increible, incredible, over and over again. But what was most beautiful about the visit was the obvious pride of these women for their craft, for their culture. Sheyli explained that although she frequently had a lot of homework, she tried to remain committed to weaving twice a week, row by row by row.

Well, I have to say that I left Sheyli’s house with a full heart, and camera. This afternoon I interview a second student; to say I’m excited is an understatement. Check back in a few days for a post on my next Mayan cultural adventure!